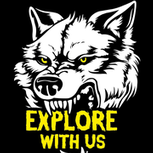 Adventures With Christian VS Area 51 Rider: The True Story